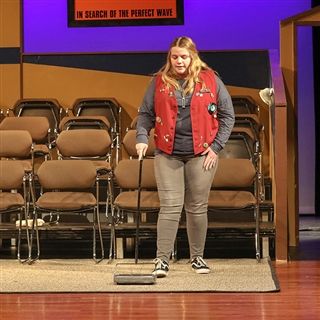 3/6/2020
Eagle Hill School
On Saturday, February 29th students from the EHS Performing Arts department participated in the Massachusetts High School Drama Festival in Chelmsford, MA. This festival is a competitive program that includes 112 one-act plays produced by member high schools. The competition is organized across three levels – preliminary, semi-final and State Finals with student excellence in acting and technical design is recognized at each level. Of the 112 one-act plays that enter the festival, fourteen were selected as State Finalists, of which three were named winners.

This year, students from EHS performed Sun-Kissed, written by Jeremy Geragotelis and adapted by EHS students and faculty. The play takes place in the year 2067, within a movie theatre near Edmonton, Alberta. Led by Director and EHS teacher Will Gelinas, the students did a wonderful job in their preparation and performance. The play consisted of many amazing student performances, such as Cole B. who played Lee, Collette B. who played Jo, Tatum U. who played Sammy, and Connor R. and Luke B. who played the characters of Shane and Packy respectively.
The one-act play was aided by over 30 students, who participated in everything from costume design, set design, tech crew, and construction. Last year, students A Picture’s Worth, which led them to advancing to the state finals, one of only 14 schools to progress that far. This year, their performance was very impressive, but unfortunately did not lead them to advancing that stage again.

Going up against schools with many more students than Eagle Hill, our performers continue to impress in the spotlight and compete on the biggest stages.

Next up for the students will be their spring show, in which they will perform The SOMEWHAT True Tale of Robin Hood at the Cultural Center at Eagle Hill, May 1-3.