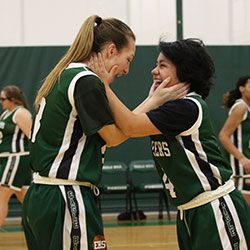 1/16/2020
Eagle Hill School
Eagle Hill School’s winter athletic programs are in the midst of their seasons with each team competing at a high level and working hard! Here are some quick updates about each team as they head in the final stretch, followed by some great photos of each team!

Boys Varsity Basketball
Coach Myra and Coach Coughlin have their boys playing tough, as the team boasts a winning record, with impressive victories against BART School and PVCIS within the last two weeks. The team has a great mix of speed, athleticism, and toughness, with Culley C. leading the way in scoring, and strong contributions from Noah R., Connor R., and Weston S., along with many others. The boys have a packed schedule ahead, with their next game on 1/17 against Bancroft School.

Girls Varsity Basketball
Coach LaCoille and Coach Leyva have seen great improvement over the course of the season with the team. With close battles against High Mowing School and PVCIS. Much of the team’s season has been decided by only a handful of points, with the team making it to the championship of the Charger Classic earlier this season. The team has been led by strong senior leadership from Kenzi M., Ash L., Taryn D., Olivia G., Julia M., and Chumani H.. Zoe F. has stepped up in her role as a scorer and a strong defensive player. Each player has stepped up in different games, and the effort has been tremendous from the entire team. The team’s role players off the bench have taken advantage of their opportunities in practice and have improved nicely as the season goes on. The team will enjoy a short break and face Dublin School on 1/24.

Boys JV Basketball
Coach Robinson and Coach Ballard has seen great efforts from their squad, as the team has worked their way to a winning record, with impressive victories against Watkinson School and St. Michaels School this week. The team has enjoyed great performances by Reilly G., Danny C., and Griffin V., among others, and they look to get better every week and with every performance. The team will face Bancroft School on 1/17 in hopes of continuing their winning streak!

Varsity Squash
Coach Jones has his team working very hard and working to improve with each match. Having participated in several matches to this point, good performances by Ryan S., Vitalyi S., and Owen G. has led the way for the program. The team will look to continue their efforts in the thick of their schedule next week against St. Paul School.

Varsity Wrestling
Coach Kelly and Coach Francoeur has enjoyed hard work from their team, with nice wins against Hamden Hall, Beaver County Day School, and Williston Northampton School. Jake J., Jarred H., and Cam D. have all enjoyer victories in some of their matches, with many others contributing to the team. The team will look to earn victories on 1/17 against Lexington Christian Academy and Chapel Hill-Chauncey Hall.

Varsity Swimming
Coach Kelly and Coach Raymond have seen great improvements from their team, with many of their student-athletes qualifying for New England’s in different events. Sophie C. also broke the Pool Record in her 100 Free race earlier in the season, one of the many accomplishments by her and the team. Their schedule picks up as January goes on, with many more opportunities for the team to get better!

Go and cheer on the Pioneers as the winter season winds down in the next three weeks! Visit https://www.eaglehill.school/athletics/athletics-calendar?siteId=680 to see the schedule of contests.