Eagle Hill School recently honored its fall sports teams at the annual Athletics Banquet. The all-school gathering is a tribute to the athletes, coaches, and the entire support staff for their many accomplishments throughout the fall athletic season.

A huge shout out and congratulations to the Eagle Hill's Girls Cross Country team for their first place win at the NEPSAC 2019 5k Pete Blanchet Championship Race!!!

In addition to the SENE league awarding the XC Girls team first place in the 5k championship race, the girls all won medals for placing in the top 15:
During the SENE 5k Championship race for the boys, medal winners were Nelson Mallick who took 5th place and Angus Lodge in 11th place.
The RVAL Championship race on 10/30/19, Captain Phoebe placed 10th overall for the girls race (64 girls in the race), and Captain Nelson Mallick placed 10th overall for the boys race (64 boys participated). and they both earned a medal. 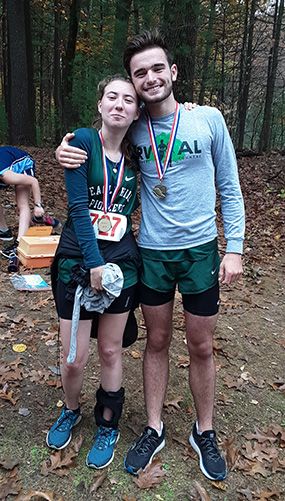 In recognition to all the fall athletes, there were many awards given out on this special night. The following students were recognized for their exceptional athletic achievements:
Girls Varsity Cross Country
(Head Coach – Ms. Nahorniak, Assistant Coach Mrs. Whittaker)